We kick the weekend off on Friday with a Meet and Greet Block Party and your first chance to meet the contestants, at Bar 901 and The Birdcage.  Saturday features daytime Kink U classes and Animal House Mosh that lead up to the evening’s main contest at Liberty Exhibition Hall in Northside.  Sunday’s brunch concludes the contest weekend with time to meet the winner, contestants, and visiting leatherfolk at MOTR Pub.

Bar 901 and The Birdcage

Block Party between Bar 901 and The Birdcage

Maps were disabled by the visitor on this site. Click to open the map in a new window.

Up to ten (7 for Critter and 3 for Handler) contestants will be selected based on their applications.

Additional entrants will be waitlisted and considered if a vacancy arises.
Applications close at 11:59pm on April 29, 2022

After we decided to make Cincinnati Puppy into a more species-inclusive “Critter” title, and add a Handler title to the mix as well, we realized that there wasn’t a commonly known Pet Play or Critter Play flag. Some individual species have flags (pup, kitty, pony) but there wasn’t a flag that covers the entire range of critters. So, we decided to develop one. We drew our initial inspiration from a flag designed by Florida Critter 2019, Aechus Kurendys, but wanted to add to it to capture more of the breadth of the community.

Each stripe represents an environment that a Critter might come from: yellow for the ground and cities, green for forests and grasslands, blue for water, white for sky, and purple for the fantasy/mystic realm of imagination, where cryptids live.

We debated a new central symbol, since a bone is very Pup and a paw print not much better, and ended up that the heart is pretty much the most universal symbol for a living thing.  So even though it mirrors the leather pride flag, we felt it fit too well to pass it up. And that now represents the handler’s love and the affection that is at the “heart” of this community.

The double C is both for Cincinnati Critter and also that this represents two titles, Critter and Handler. 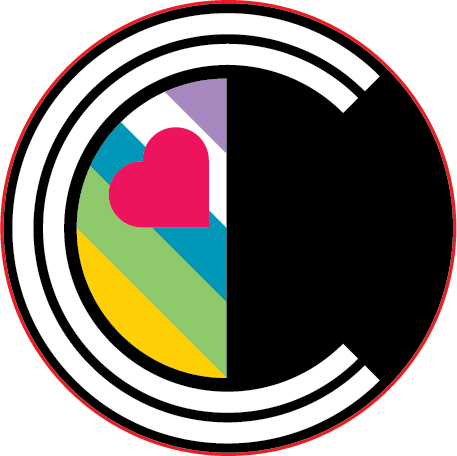